One of the leading kitchen & bathroom trends is universal design. This can be seen in the shift from door knobs to door handles, which can be opened by people with limited hand strength or grip. Kitchen appliances are evolving to use buttons instead of knobs for the same reason. Vancouver is the first major city to essentially ban the doorknob, but others are likely to follow with other universal design mandates.

We will see appliances with larger buttons and displays to accommodate those with limited vision. Kitchens are being designed to put everything in easy reach, instead of requiring someone to stoop down or climb up to get items. Universal design features aid those who are elderly but also the disabled. For example, far more shower remodels include a built in ledge that can double as a seat. Whether used to hold beauty products without the need for a shower caddy or acting as a seat for someone with limited balance or mobility is up to the resident.

Accessibility for the Aging

One of the major kitchen & bathroom trends is accessibility for the aging. For example, many bathroom remodels include an open shower that uses a glass partition to contain the spray and a gradually sloping floor to act as a drain. About half of NKBA respondents stated that no-threshold showers are being specified by customers. This type of shower avoids a door or the need to step into the shower itself, something that improves accessibility for someone with decreased mobility or balance. The trend toward larger showers is another accessibility trend. Instead of only having the space for someone to stand up, the showers are trending larger so that someone can use it while sitting on a comfortable shower stool.

Toilets may or may not remain in a side closet in the bathroom. However, to accommodate an older and often larger population, the toilet seat itself is more likely to have a larger seat and more space around it.

Grab bars built into the bathroom are a popular upgrade. Adding discrete grab bars near toilets, showers and seats in the parlor are easiest to install when remodeling the bathroom. In the kitchen, universal design leads to levers in place of knobs for the kitchen sink. No-touch soap dispensers are popular because of the ease of use as well as the improve sanitation.

Kitchen & bathroom trends toward water and energy savings have been going on for a long time. This has been driven by local, state and federal laws mandating various forms of conservation. Low flow toilets are one example of many. Lower volume shower heads are another.

We are seeing improvements in the effectiveness of the latest generation of efficient appliances. Gone are the days of low flow toilets that have to be flushed twice to eliminate waste. Low flow shower heads now have an array of settings or put out steam as well to make the shower a luxurious steam bath or delicious massage.

Wondering if it's worth it? Want to learn more about the numbers? Check out the Cost vs Value Report! 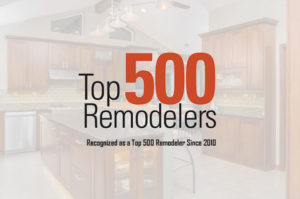